But if anyone had questioned her loyalty, he or she would have been denounced as a racist, bigoted “Islamophobe.” 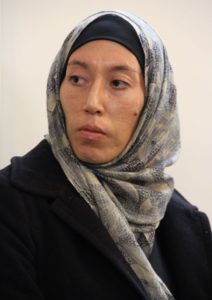 WARSAW, Poland—The Trump administration announced a new package of sanctions on Iranian entities tied to the cyber backing of U.S. individuals, a move that comes on the heels of American authorities indicting a U.S. Air Force officer who allegedly tried to pass classified information to Tehran after defecting to the country.

Witt had access to secret and top-secret information, according to the indictment, unsealed early Wednesday.

Witt was deployed to several overseas location to conduct “classified missions collecting signals intelligence,” including those of adversaries.

Witt had access to “classified information, including details of ongoing counterintelligence operations, true names of sources, and the identities of U.S. agents involved in the recruitment of those sources,” according to the indictment.

“In or around January 2012 to in or around May 2015, in Iran, and elsewhere outside the jurisdiction of any particular State or district, defendant [Witt] did knowingly and unlawfully combine, confederate, and agree with other persons, both known and unknown to the grand jury, including officers of the IRGC, to knowingly and unlawfully communicate, deliver, and transmit to a foreign government, specifically Iran, and to that foreign government’s representatives, officers, and agents, directly and indirectly, documents and information relating to the national defense of the United States, with the intent and reason to believe that the same would be used to the injury of the United States and to the advantage of Iran, in violation of Title 18, United States Code, Section 794(a),” the indictment alleges.

The disclosure of this information leak was timed to coincide with an announcement by the Treasury Department that it is sanctioning a handful of Iranian entities for their role in cyber hacks on Americans.

The sanctions hit an Iranian-based entity tied to the country’s Revolutionary Guards Corps, or IRGC. This includes “efforts to recruit and collect intelligence from foreign attendees [of various conferences], including U.S. persons, and four associated individuals,” according to the Treasury Department.

Sanctions also were leveled on “a separate Iran-based entity and six associated individuals involved in the targeting of current and former U.S. government and military personnel as part of a malicious cyber campaign to gain access to and implant malware on their computer systems.”…